Estimate the human equivalence of your cat's age - December 25, 2019

Estimate the human equivalence of your cat's age

On the occasion of Poppy's entry in the record book as "the oldest living cat in the world" at the age of 24 (about 114 in human age), it would be interesting to know how to know the human equivalence of the age of our respective hairballs so that we can have fun comparing their age (and perhaps even their maturity!?) with our own.


Update of 12/06/14: Unfortunately we learn only a few days after the writing of this article that Poppy is no longer of this world. A thought to her and all those who loved her during these 24 years of life!

But before that, let me introduce you to the current dean of our little domestic felines.
Poppy, who therefore celebrated his 24th birthday, changed his family twice and his name (formerly "Popsy") before being adopted at the age of 5 by Jacqui and Marguerite living in Bournemouth in the United Kingdom with their 2 sons, 4 other cats, 2 rabbits and 1 hamster !

This cat, a lover of fried chicken and "fish and chips", is now deaf and blind and her general appearance suggests, despite the care taken by her masters, that she is very old. 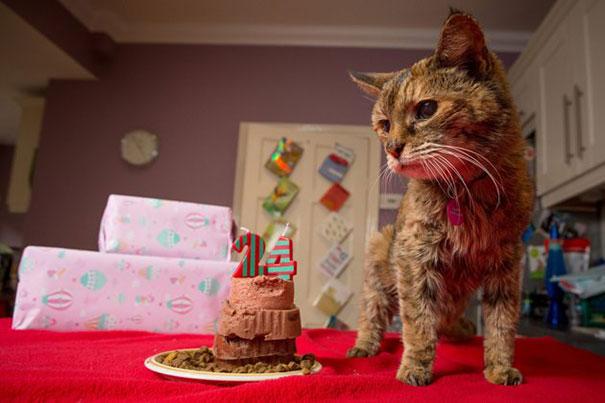 Poppy succeeds Pinky who lived until the age of 23 and died last year.

But the cat with the longest life span is Creme Puff. This American and even Texan cat died at the age of 38 years and 3 days (still 170 years old in human age about!) in 2005.
And his master, Jake Perry, seemed to have found the recipe for feline longevity since Creme Puff lived alongside Granpa Rexs Allen, another cat who died in 1998 at the age of 34.

After the presentation of these cats among the oldest in the world, let's try to know the human equivalence of the age of our cats to be able to compare with them the weight of the years!

It would be very practical to have a multiplier factor to apply to the age of our cat, as we can sometimes hear for other animal species. We would just have to multiply that number with the number of his age. Unfortunately, it is not that simple because their growth does not have a linear rhythm and is therefore not always proportional with human age. Clearly, childhood and adolescence as well as the "third age" of our cats occur at a much faster rate than the rest of their growth and aging, making these age periods more difficult to estimate in terms of human equivalence.

To estimate an equivalence in human age in order to understand how cats' growth and aging work, especially in the somewhat particular periods I have just mentioned, veterinarians rely mainly on observations that can be made in the development and evolution of the physique of our small cats.

Thus, it would seem that at 1 year old the cat has almost finished his adolescence by reaching about 16 years of human age, which represents almost 1.5 human years for 1 month of a cat's life! From the age of 2, their ageing progresses at a constant rate, making them take 4 human years at each birthday. Around the age of 19, ageing starts to accelerate again and becomes more difficult to estimate.

Some elements that can influence the longevity of a cat

Regarding the type of cat, it has been observed that "alley cats" live longer than purebred cats.

It has also been shown that short-haired cats can have a longer lifespan than long-haired cats.

In terms of lifestyle, a domestic cat could live to an average of 15 years or more, while a stray cat lives to about 12 years of age. These lifestyle-related figures are obviously influenced by, among other things, the way they eat, the diseases to which they are exposed and the comfort and health care that humans can provide them.

Since we are now talking about longevity, why not take an interest in the longevity of other domestic animals or even a little more unusual animals...

Longevity of other pets

And if we go there with other more unusual animals....

The Arctica Islandica clam lived to be 507 years old, after being killed by scientists who tried to open it to study it!
Some primitive animals, such as sponges or corals for example, can live between 1500 and 4500 years. Some lobsters are even said to lack a mortality factor due to aging.
The jellyfish Turritopsis Nutricula, on the other hand, would potentially be immortal since it is able to interrupt or even reverse its growth cycle to rejuvenate.

And I'm not even talking about certain plants (such as Posidona Oceanica, which can live between 80,000 and 100,000 years) or bacteria (which can survive millions of years)...!